The Virginia Project Diaries: The Next Seven

Here are the next seven women who created art for Tina Barry’s The Virginia Project. Each piece is inspired by a passage which is included. Take a moment to read through their work, what they’ve done, and check out the great work that was created by each and every one! If you weren’t able to check out the other posts, you can find an Interview with Tina Barry Here and the First Seven Artists Here.

Stay tuned for a final interview with Tina Barry about her closing thoughts and ideas on The Virginia Project experience! 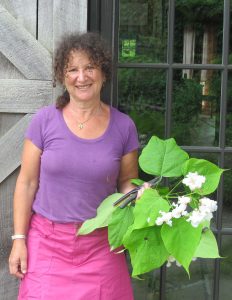 Wendy Hollender is a botanical artist, author, and instructor who leads workshops in varied locations. Hollender’s illustrations have been published extensively. She has exhibited in natural history museums and botanical institutes, including a solo exhibit at the US Botanic Garden. Wendy has three books on botanical drawing and co-published and illustrated Foraging & Feasting: A Field Guide and Wild Food Cookbook by Dina Falconi.

Wendy’s watercolor “Daylilies” was inspired by Barry’s poem of the same title:

“If you were here and not resting as I imagine you in the milky light of your hotel room, we’d sit together while the children sleep and choose daylilies for the garden — Crimson Pirate, Fairy Wings, August Pioneer — hoping the flowers open early, so we’ll still be together to see them bloom.” 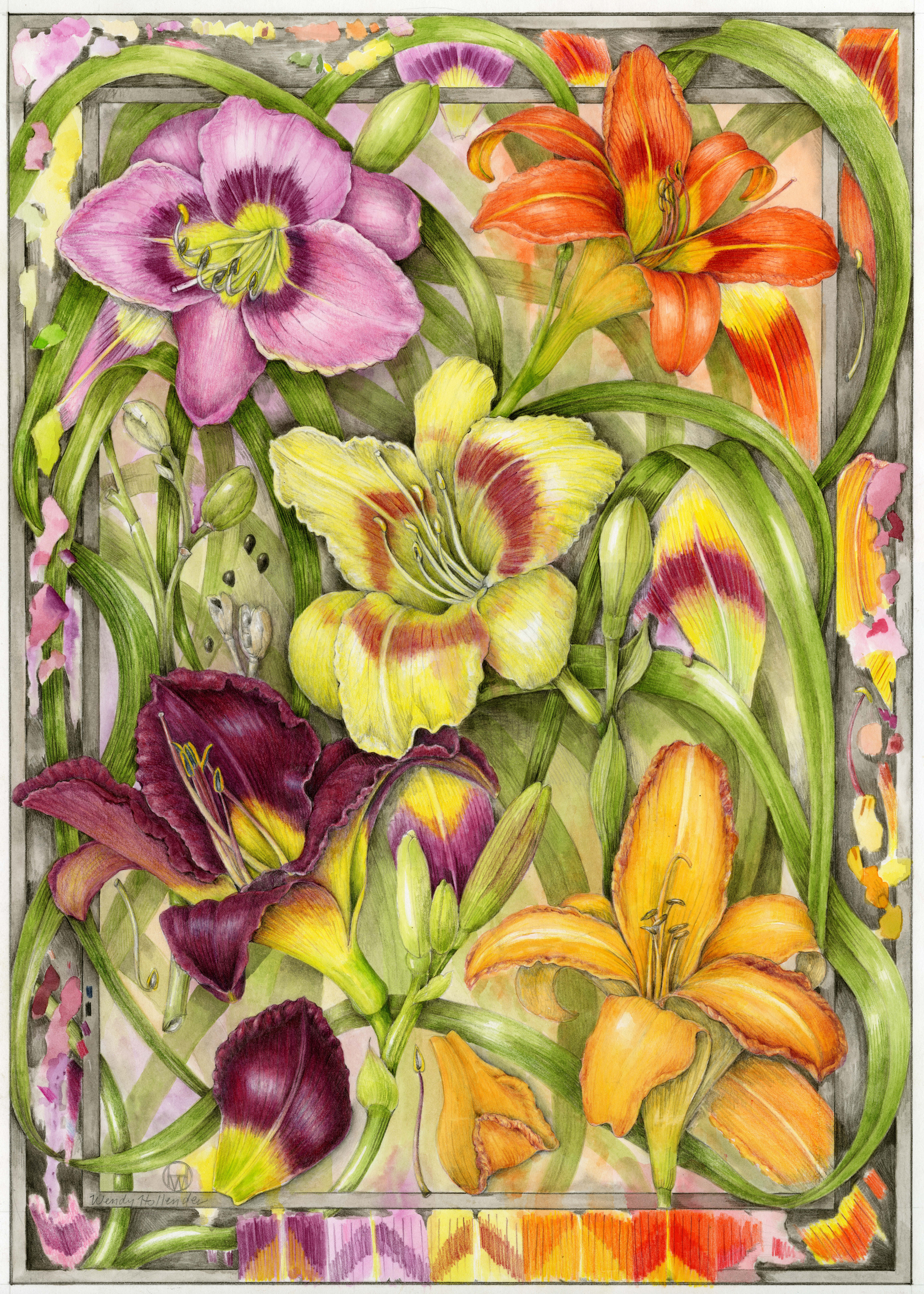 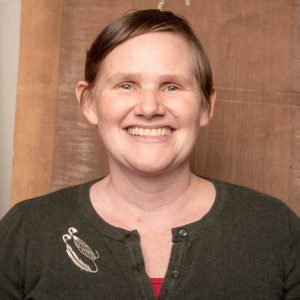 Jenny Lee Fowler is a freelance artist, teacher and curator. Her cut-paper work has been commissioned by private and commercial clients worldwide. Fowler has exhibited domestically and internationally in solo, two-person, and group exhibits, and has been included in publications such as the New York Times, Better Homes and Journals, and Martha Stewart Living. 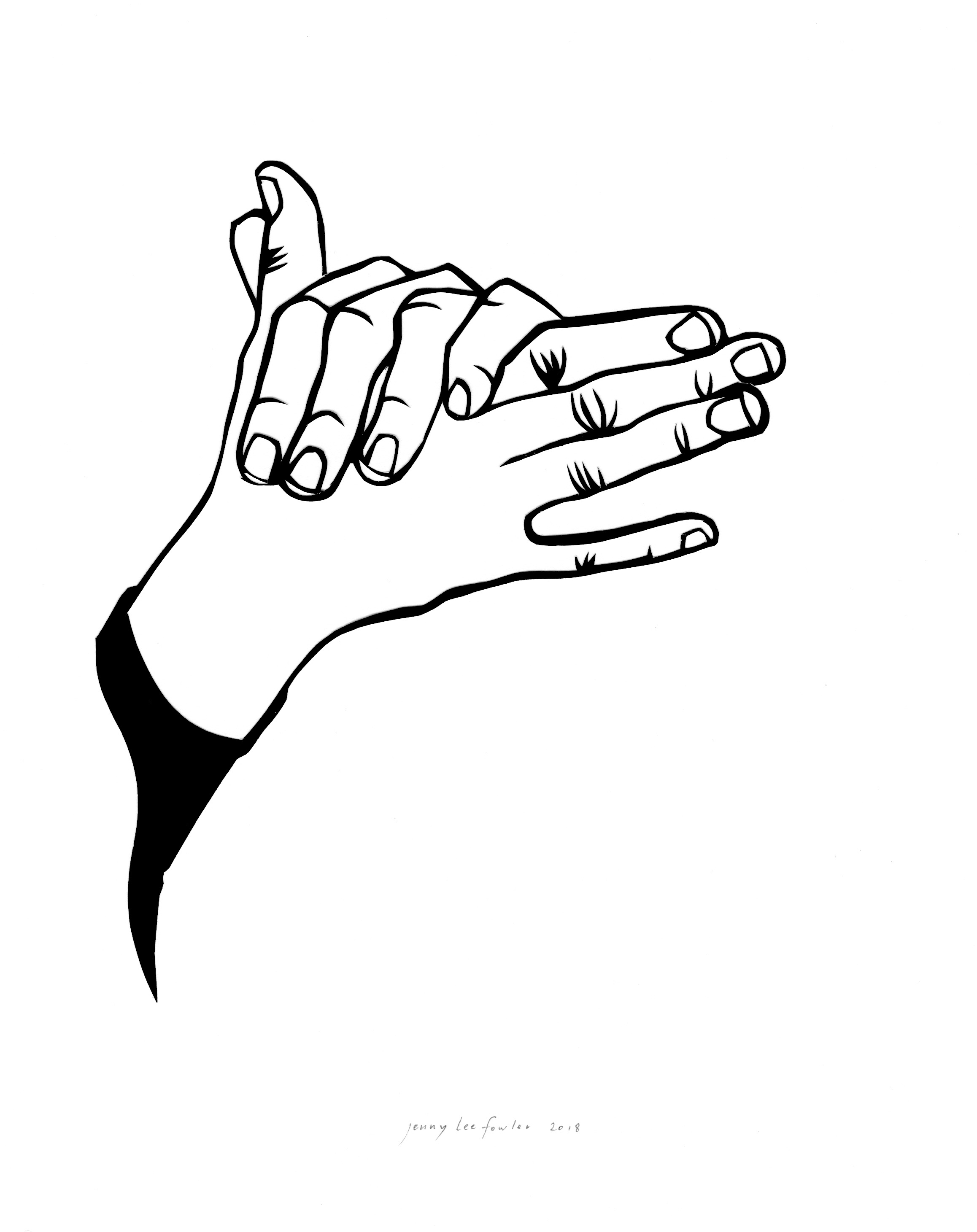 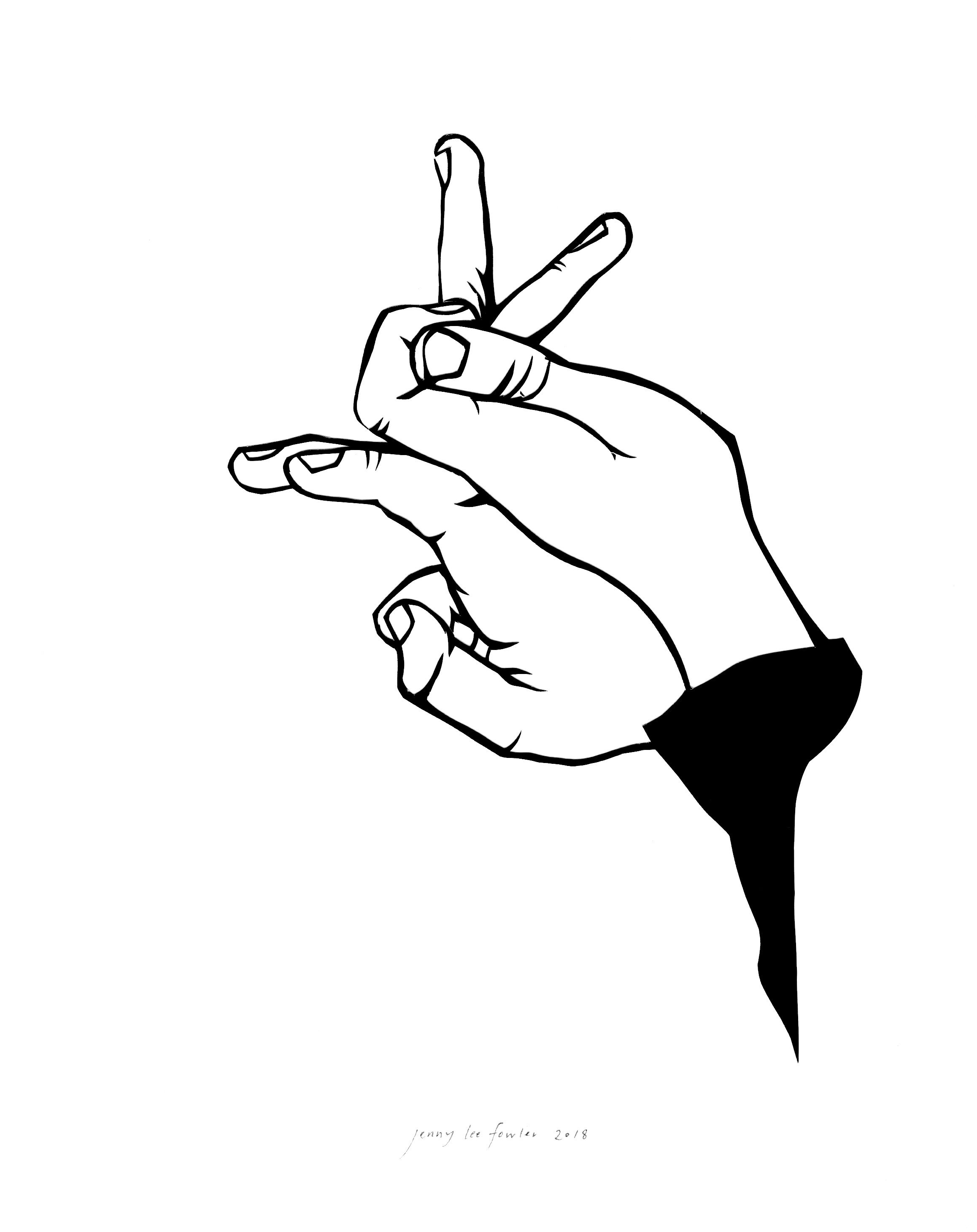 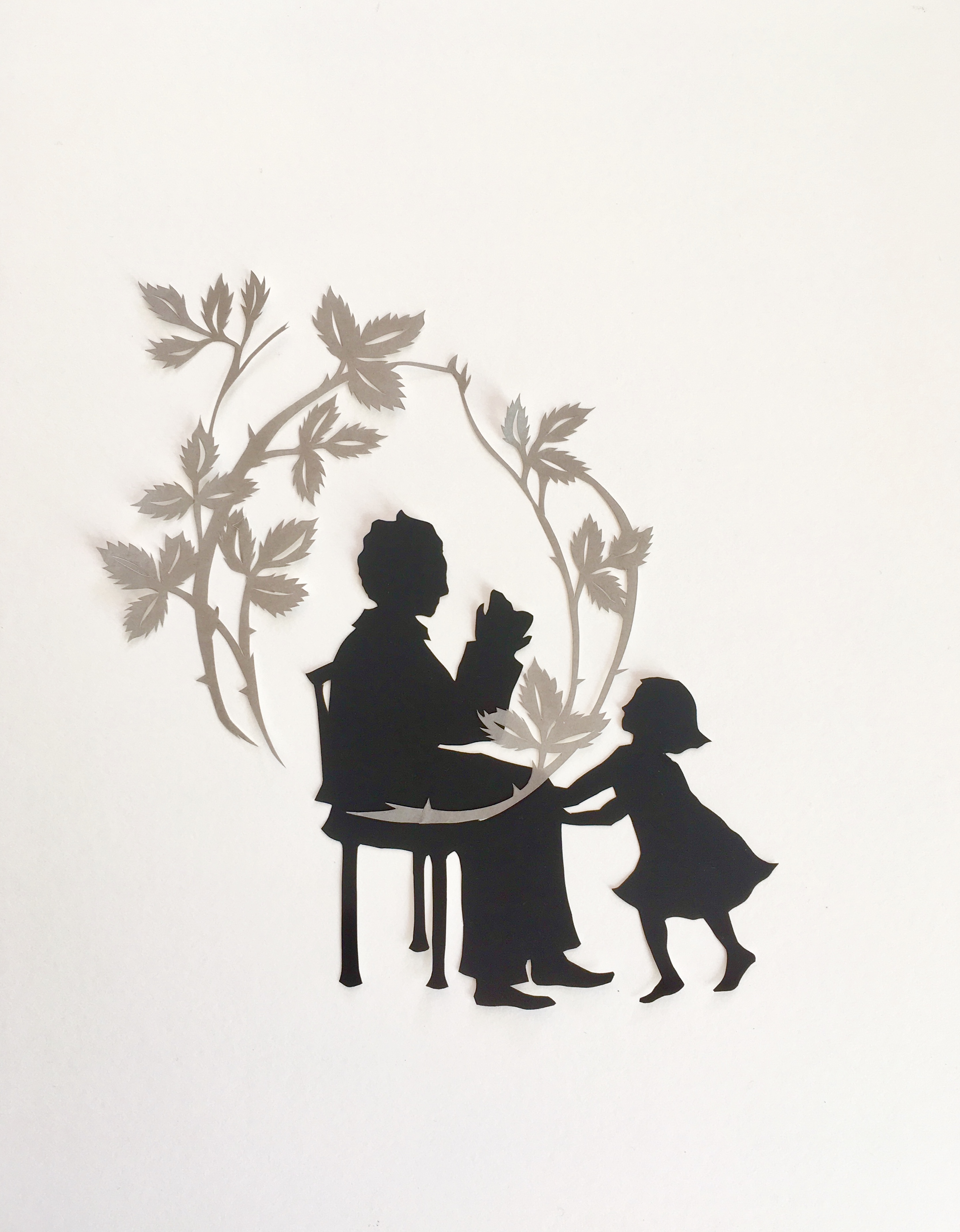 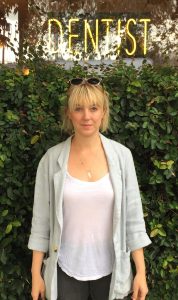 Jamie Gaul lives and works in Brooklyn, NY. Since 2012, she has been a co-creator (with Rachael Morrison) and editor of ‘Drinkollage’ a full-color 48-page ‘zine of collages created at collage events thrown in Brooklyn and Los Angeles. At the events, participants are encouraged to let their inhibitions go and create work in a relaxed, inclusive environment. In addition to her current cut-paper work, Jamie also makes sculpture and has been the recipient of the Van Lier Fellowship at Urban Glass. Her studio is located in Greenpoint.

“The art dealer’s new girlfriend Joan? Inez? Sally? reclines beneath the cherry tree; it and she are in full bloom. She’s brought a variety of cheeses to share and watches Marc and me, the dealer’s old friends, look them over as if we’d banish her for an unripe Brie. We’d love to ask her how they met? What she does? But she’s listening, eyes wide in rapture, as the art dealer describes an exhibition in Amsterdam that teetered provocatively between the sacred and profane. The “Drama Diva” in France, still heartsick over his defection. And “Only Tuesday,” the critic’s lusty wife with one day a week open for a tryst. The girlfriend lights a cigarette, picks a flake of tobacco off her tongue. In six months, she’ll be the “Silent Smoker.” Until then, she’s the one he loves.” 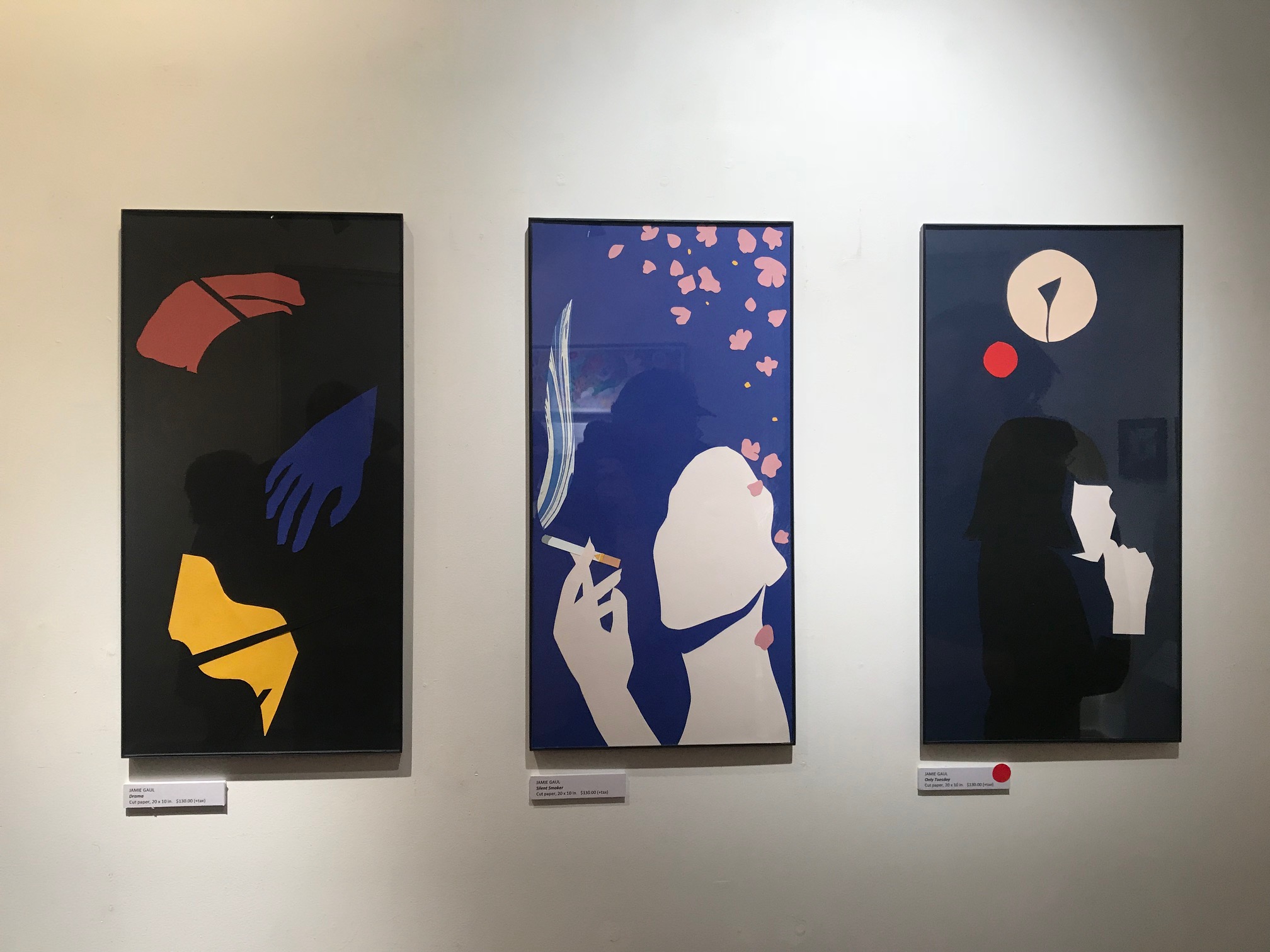 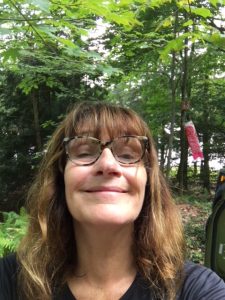 Ingrid Keppler Lisowski is a German-born artist living and working in New York. Her work is process-oriented and culminates in different forms including sculpture, installation, drawing, and printing. She explores the notion of visual memory and perception of space, vacillating between representation and non-representation. Lisowski replicates the same object or element over and over, resulting in a redundant pattern based on nature. The transformative energy of familiar elements taken out of their natural context and reproduced in unrelated materials reflects both the repetitive practice of art making and the meditative environment that results. Lisowski has most recently been involved in collaborative projects. Her work has been exhibited in New York and Germany.

“John’s scent settles on the walls, into the torn fabric of the couch; I could mop it off the floors. He sits on a metal chair near the unopened window, knees to his chin and rocks. His hum is tuneless, a distracted bee. I cook what he likes, or once liked, before he became this John: fried cheese sandwiches on thickly sliced bread. A baked potato with a steaming pool of butter. Summer pudding and berries. He stares at the food, frowns. I pull my pants off, stand in front of him, press my bare crotch to his face. He moves his head back, slowly, wincing. Cat, cadmium, clove, he says, staring past me. Potato, cat, cadmium, clove. 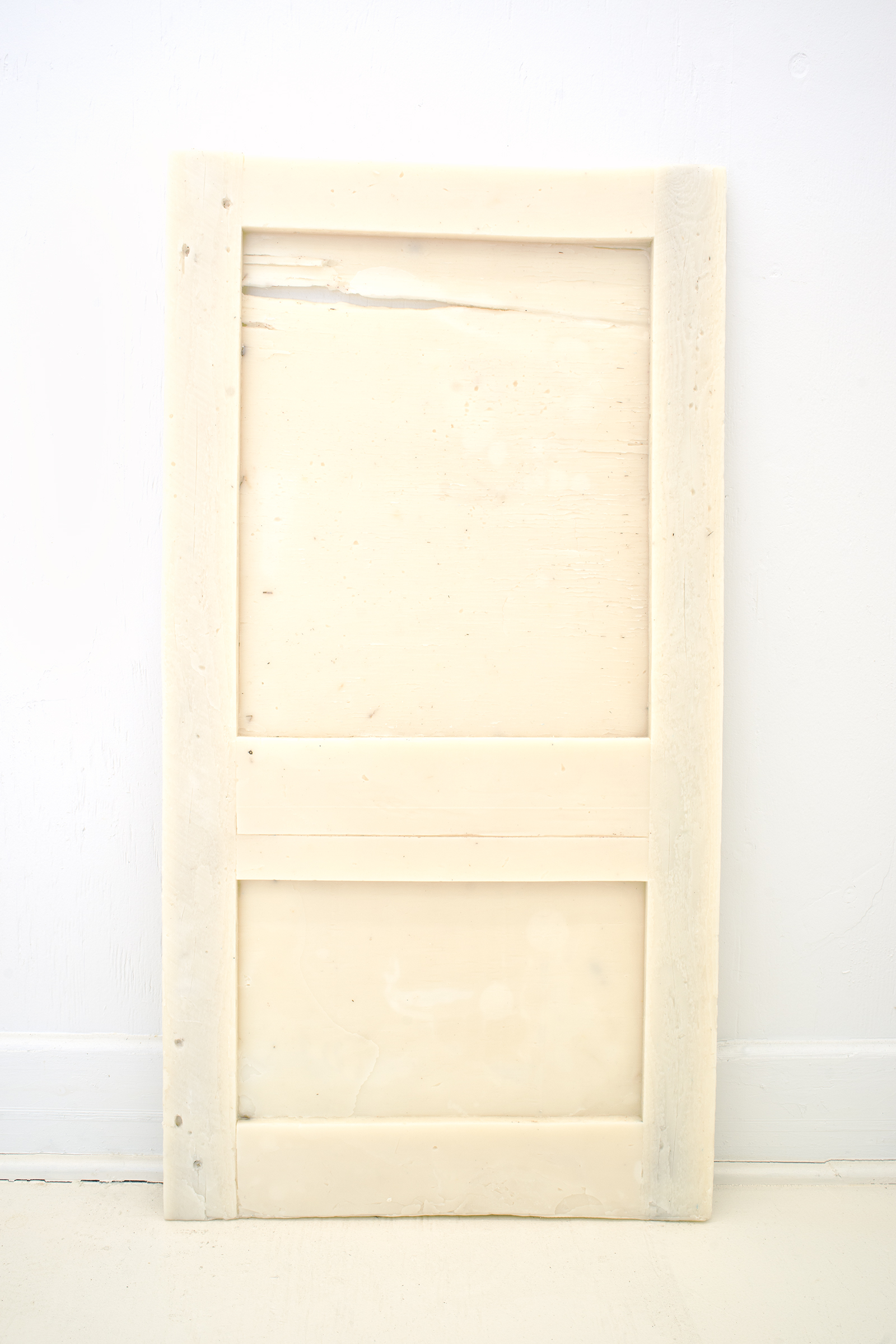 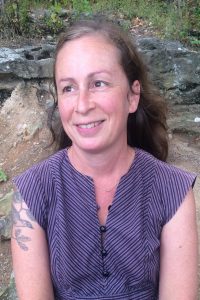 Giselle Potter’s parents started a puppet theatre company called “The Mystic Paper Beasts,” and her grandparents were artists, so, she says, “It’s no surprise that I became one too.” After graduating from the Rhode Island School of Design, Giselle became an illustrator. Her drawings have been included in The New York Times and The New Yorker. She’s illustrated stories for authors including Toni Morrison, Mary Pope Osborne, and Ursula Hegi. Her two recent books are Tell Me What to Dream About and This is My Dollhouse.

Giselle’s “Circus” (watercolor and ink on paper) was inspired by “Circus”:

when we get there two clowns are smoking cigarettes outside one sees me and squeezes his big red nose behind a curtain i can see a bearded lady who is smaller than i am there are pictures of man twins that share one body and dead babies in jars that i do not want to see elephants wear flowers around their necks and march in a circle one big tiger climbs up a little ladder a man with a big curly mustache wants him to jump through a ring of fire the tiger does not want to jump so the man cracks the whip.” 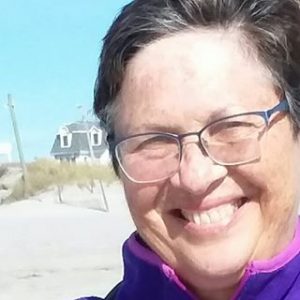 Barbara Danin is a Philadelphia-based painter who works in watercolor and collage. Her watercolors “piece together shards of information that create relationships between past/present, the realms of spirit and earth, abstract/representational, and inner and outer realities. I attempt to create visual journeys with life-affirming memories and themes that offer solace, refuge and meditative spaces.”

“Your dreams settle over my sleep. A great smear of red. Bella. Sun singes my fingers when I touch. Onyx eyes and grim pressed lips. A tornado of birds circle. Her throat offers a thousand small wishes. Boots churning dust as the Poles threaten a rearranged world. A nun in white habit makes angels in the snow.” 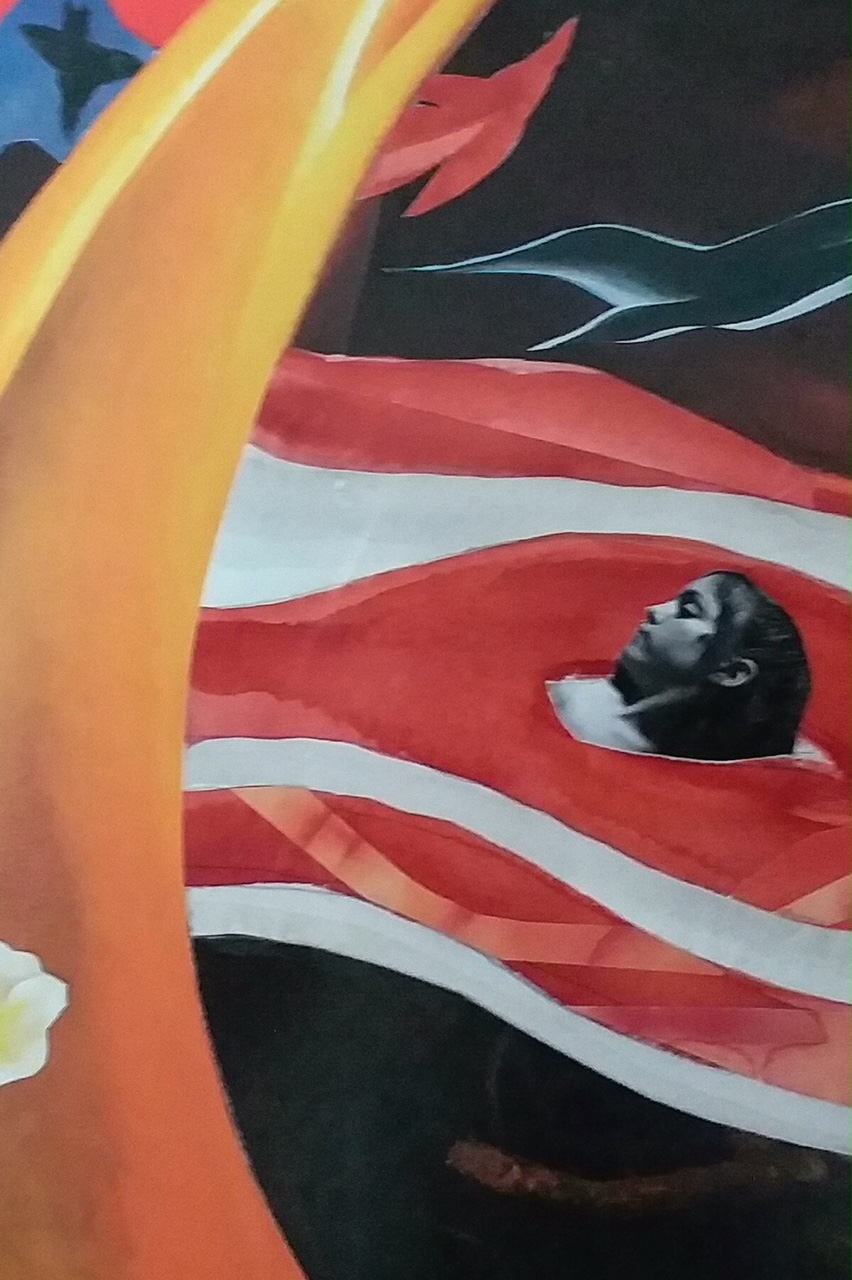 “Take me There” (watercolor on archival paper) is inspired by “Clairvoyant.”

“When I Hold a Finger to My Ear

I hear your call, brined in salt yet distinct. You challenge me to a duel of rhymes, but I’ve sparred with you before. Can you smell my longing through the rivets of your palm? Hear the rain pummel my coat?

Your Fate Line is My Fate Line

Why pretend otherwise? A tortoise raises its head, admires the shadow of its profile on the ocean. Shoals of your skin bob and cool. I warn the children not to swim there.

I Picture a Raft in Your Future

Tattoo my back with seaweed, conch shells, anchors and Apollo’s lyre. Think of me as a new ocean to voyage. The sun line deepens heading south.

All Lines Lead to Impatience

I’ve conjured a route with Mercury to guide me. Mussels shiver in nets. Buoys bounce. The hull is below, resplendent in its weather. Take me there. Even the boat creaks with compliant. It’s traveled too far fro romance.” 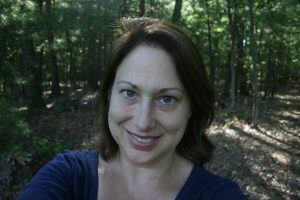 Amy Talluto earned her BFA from Washington University and her MFA from the School of Visual Arts. She is a 2018 NYFA/NYSCA Artist Fellow in Painting. She recently had solo shows at Jeff Bailey Gallery and Black & White Gallery. Amy’s work has been included in a two-person exhibition at PS 122 Gallery in New York, and several group shows.

“The real estate agent wore a fedora, smashed almost flat, a cartoon hat too small for his head. He advertised the quality of his coat with a label sewn near the cuff of one sleeve: 100 percent wool. Beneath it, a shirt stretched so far the buttons barely held; I could have rested my hand on the balloon of his belly.

With the windows open, light poured in, a pure yellow Catskill’s light Marc would have loved. We drove from Wallkill, to Bethel, Warwick and Mt Hope. We drove to Kingston, Cottekill, Olive Bridge and Accord. None of the homes suited. Your husband’s some kind of artist, right? I nodded. Well, he said, I have a house. It’s small and kinda beaten down, but it has another little house next to it. Maybe your husband could do whatever he does there?

In High Falls, a small village of wooden homes, cows grazed; cats on front porches turned their bellies to the sun. He parked the car on a narrow side street. With his hand on my elbow, we picked our way along, the air phosphorescent with fir trees and the clean, mineral smell of water. Look up, he said. Miles above us the falls roared down as if God had slashed the sky and emptied the oceans.” 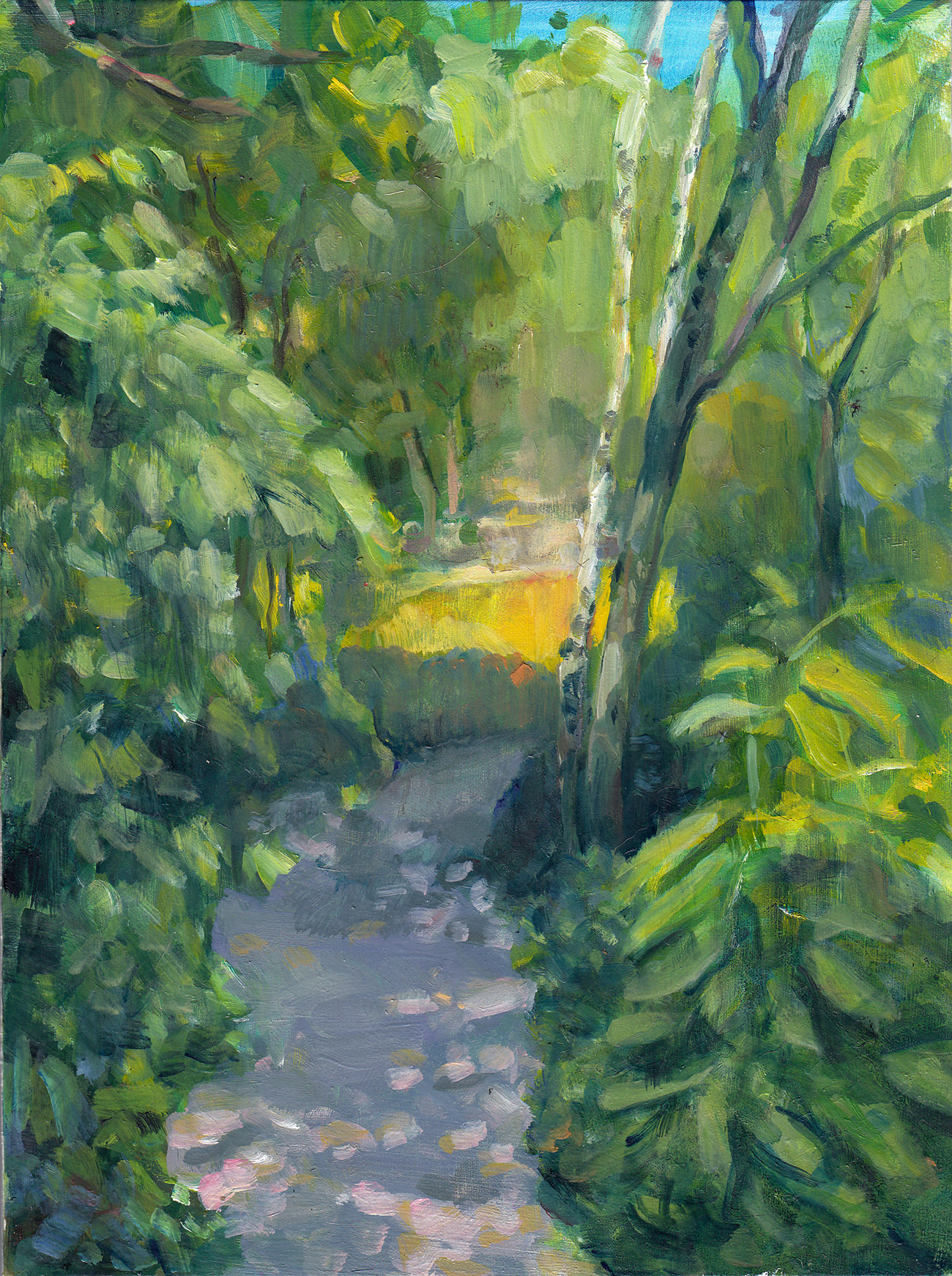 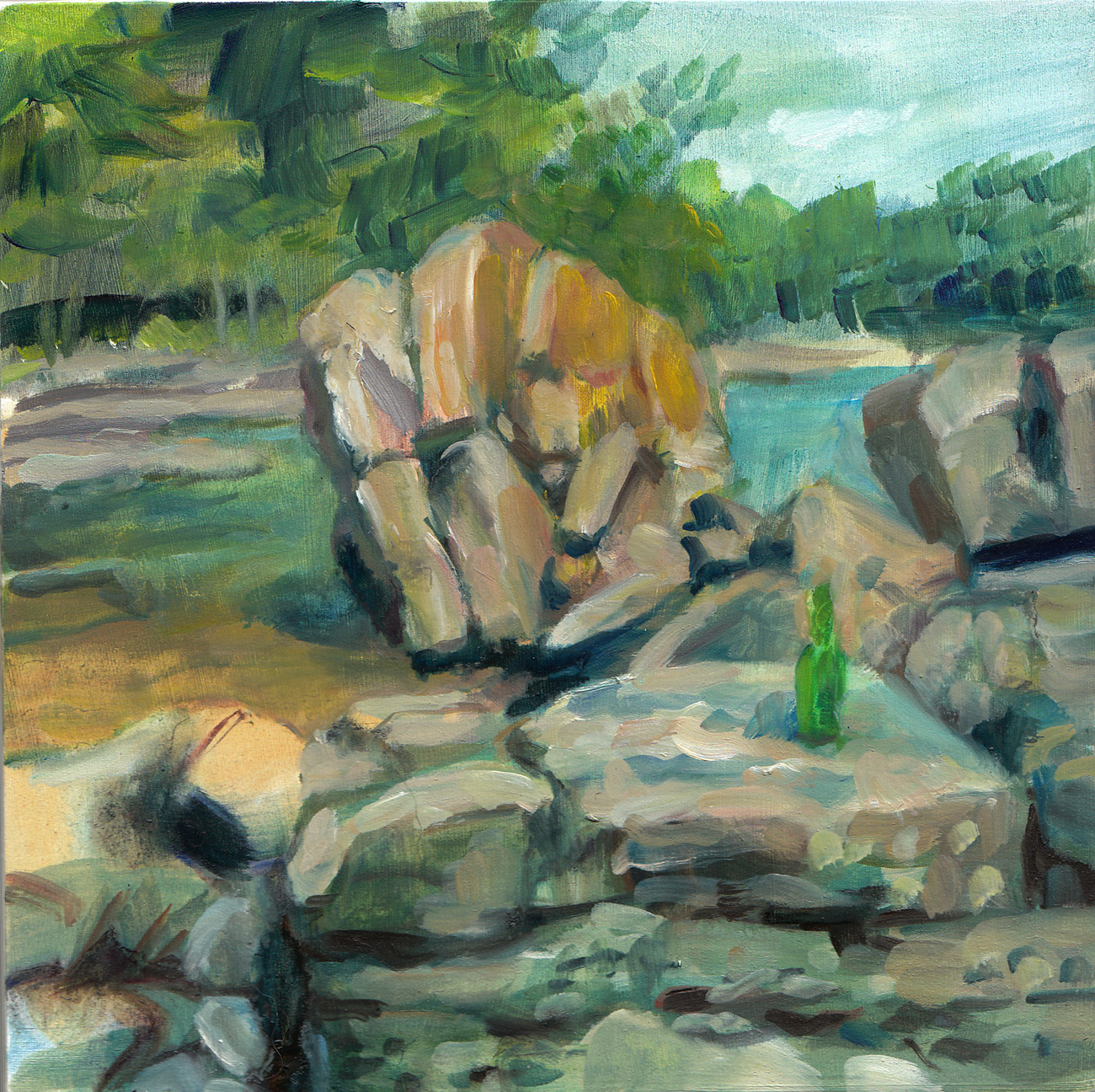 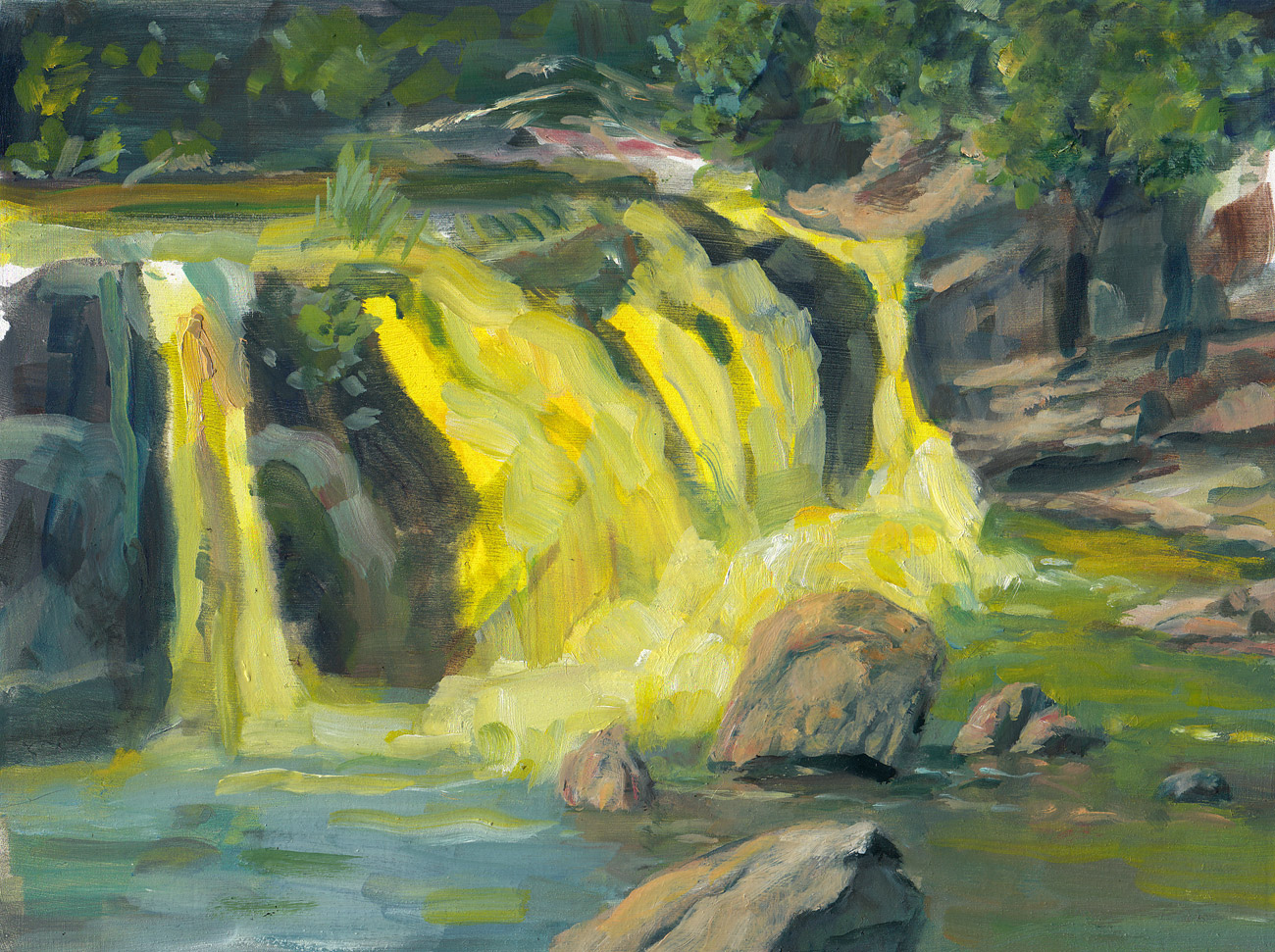 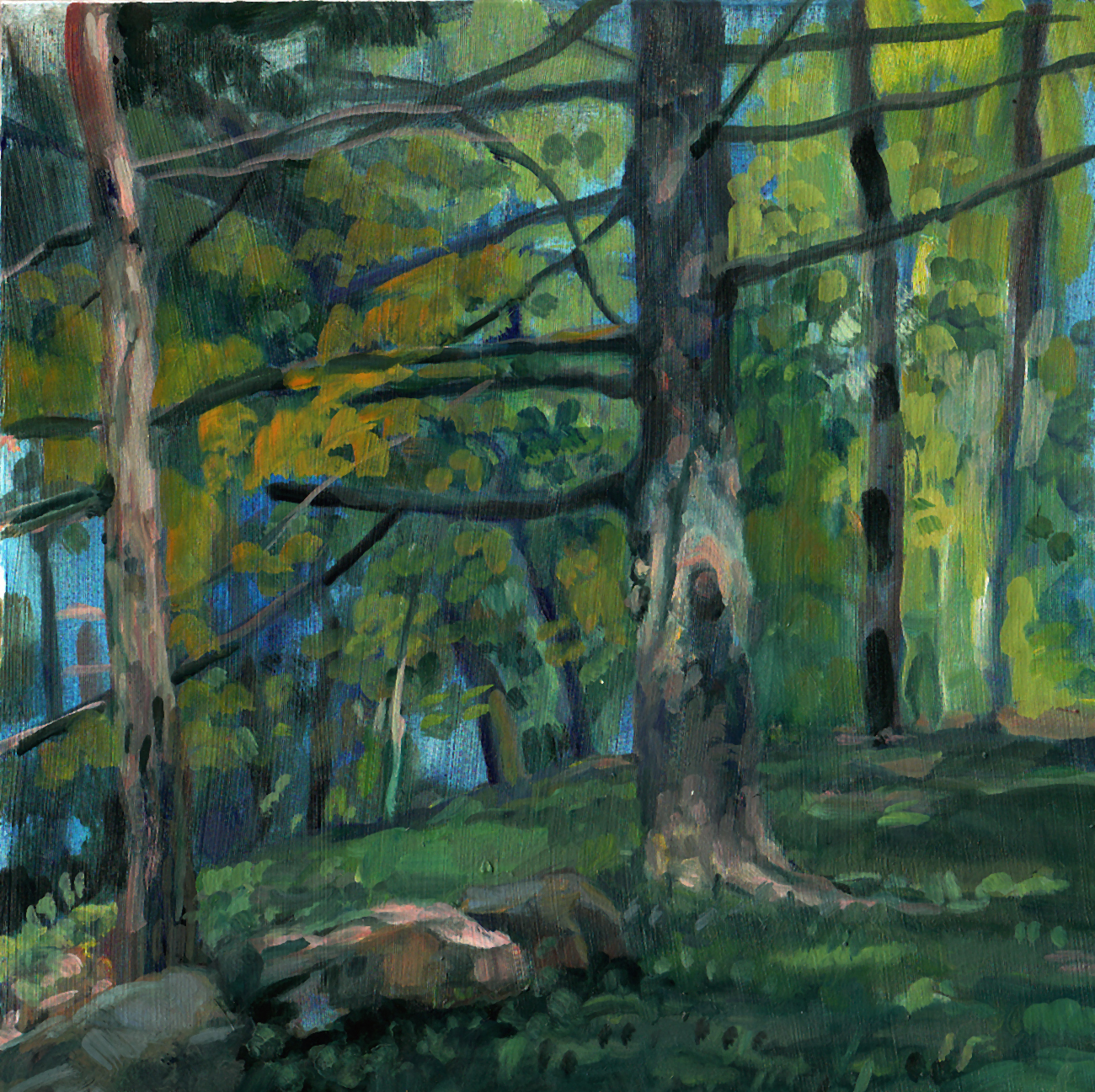 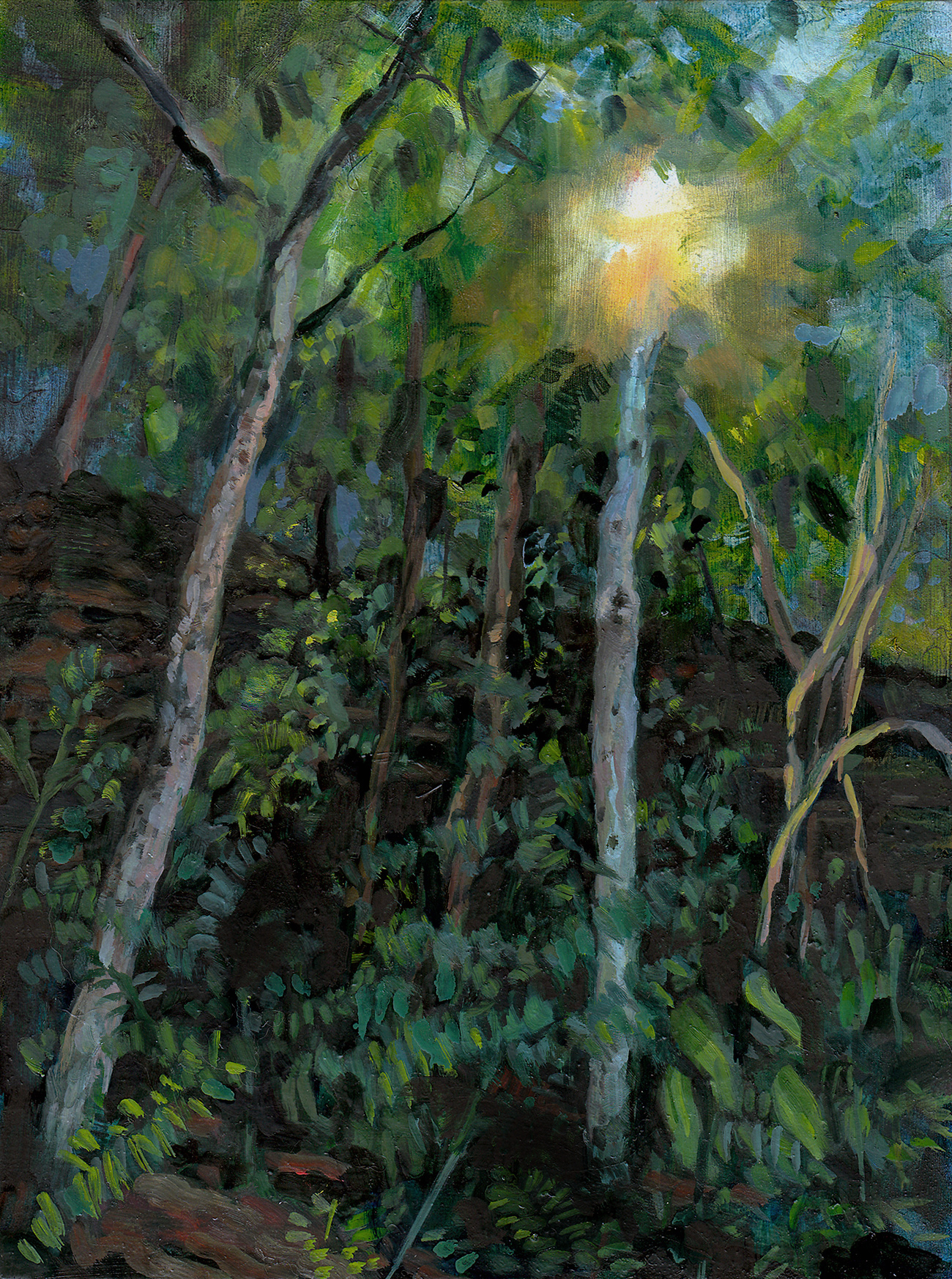 These seven women conclude the art created for The Virginia Project. If you like what you see, or have more questions, reach out to them, or shoot us an email at bendinggenresnews@gmail.com. We’d love to hear from you! 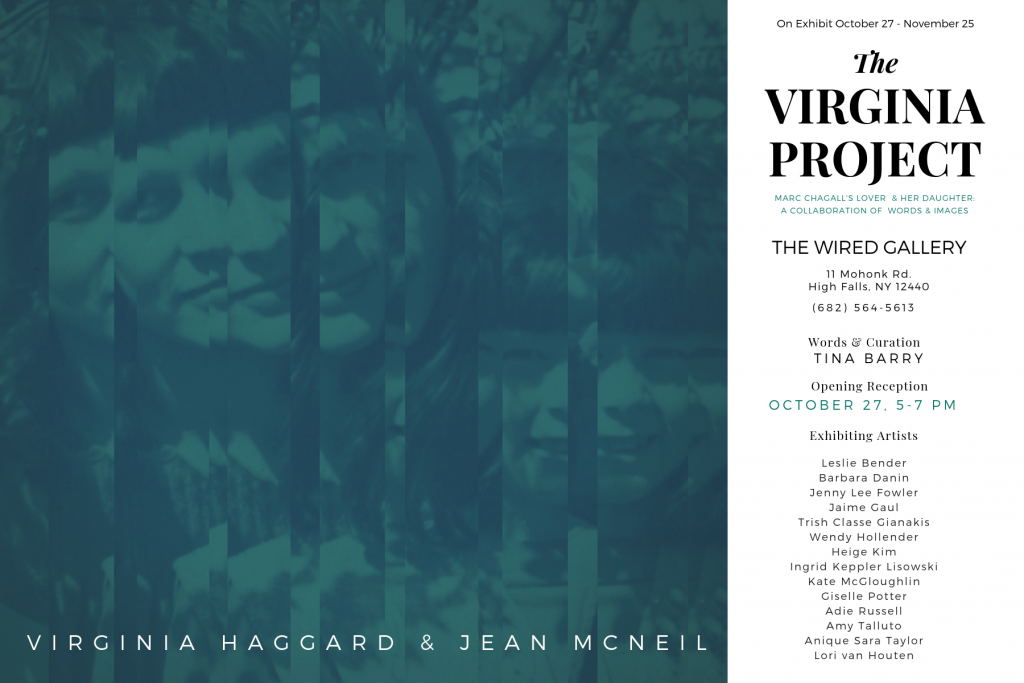