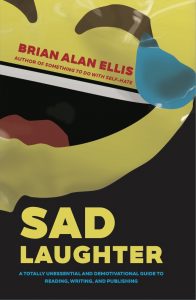 (47) A random page number. Here’s an excerpt—a potential blurb for a book you’ve possibly already written and can purchase from Brian for a small fee or certain number of retweets—from that godforsaken page: “Crackling with powerful satanic energy, [this book] is like When Harry Met Sally except Harry listens to nu metal and Sally is possessed by Zuul from Ghostbusters, has an addiction to shitty speed, and may or may not be a juggalo.”

(1) The number of times I wondered if this is a book about anything, wondering if the meta-narrative of a ramped-up lampoon of the writing ego—the ability of a writer to not just put down their work on the page and feel the need to share it with people, but to actually invest energy into whether or not it gets read—that operates as a half-wink to itself is a true modern narrative before realizing that it’s actually just a book about this fucked up dude in Florida (SHOCKING!) listening to Primer 55 bootlegs and trying to figure out a way to geo-cache old Matt Bell Facebook posts and bust balls on them.

(14) The number of times I wish I was watching the Sting vs. Vader White Castle of Fear vignettes on YouTube instead of reading this fucking book.

(55) The page I was on when I read It may or may not be a good thing that touring poets don’t get fucked with by cops and/or beat up by skinheads at readings i.e. ’80s Black Flag shows.and thought, “Man, it probably super sucks to be Brian Alan Ellis and think about shit like this all day long.”

(11) The number of “The Poet Laureate of . . .” jokes in the book, though they might as well not be jokes because have you fucking met poets? Jesus Murphy.

(5) The number of stars Dave Meltzer would give this book if he read it at the Tokyo Dome instead of how he actually read it, which is to say that he doesn’t even know it exists and never will, just like every person ever with every chapbook ever.

(0) The number of times Brian has beaten Battletoads.

(26) Just some number. Who cares? I just need to pad this thing. I guess I’ll say in closing that this is a weird-ass book that makes caring about anything seem like a fucky emotional skullduggery. Felt bad. 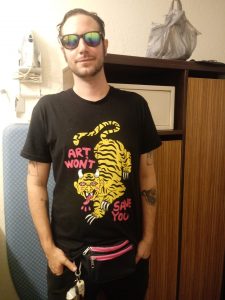 Brian Alan Ellis runs House of Vlad Productions, and is the author of three novellas, three short-story collections, a previous book of humorous non-fiction, and Something to Do with Self-Hate, a novel. His writing has appeared at Juked, Hobart, Monkeybicycle, Electric Literature, Vol. 1 Brooklyn, Funhouse, Talking Book, and Queen Mob’s Tea House, among other places. He lives in Florida, and tweets sad and clever things at both @brianalanellis and @HouseofVlad.

Ryan Werner is a lunchlady at a preschool in the Midwest. He is on Instagram @YeahWerner, has a website called www.ryanwernerwritesstuff.com, and is in a bunch of mostly-unlikeable bands.