I too dislike flash fiction, sometimes by David Swann (with cartoons by Bob Nancollis)

The first widely-read ‘books’ appeared in Medieval times. They were made out of stained glass, and relied upon sunshine. When illiterate church-goers visited the new cathedrals, they’d read stories about saints and sinners, painted in light.

Eventually, illustrated windows became associated with the floors of the buildings that contained them. Hence: ‘storeys’.

Hence: our word ‘story’ now contains the ghosts of buildings, pictures, and light.

This little essay is too short to scale buildings, and not wise enough for light, so it’ll have a pop at ‘pictures’, instead. More precisely, it’ll connect flash fiction to cartoon-strips and one-frame funnies, like those my friend Bob Nancollis has drawn for our joint-projects recently.

The essay’s not long enough for ‘pictures’ either, but never mind. 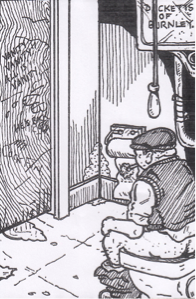 Recently a cartoon of Serena Williams was blamed for reinforcing racial stereotypes – an uncomfortable reminder of what might happen to very short forms that leave little room for complexity or nuance.

On the other hand, nuance is useless, sometimes. As a child, I remember my dad reporting bristling pleasures in the factory where he worked. Management had turned mean again, but the workers were watching the notice-board, waiting for their hero, The Cartoonist, to strike back… 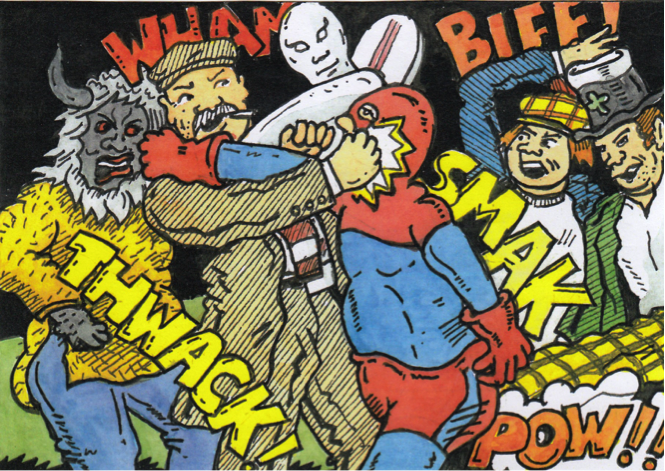 However we interpret their broad brushstrokes — whether the tight frame has been used to limit or to lift its readers — perhaps cartoons cope better with caricature than characterisation? With such little space at their disposal, how can they hope to manipulate the three conflicting dimensions of mind, body, and social role that Lajos Egri identified as the constituents of rich dramatic characters?

Even John Cheever must have faced somepressure of time and space while writing his 1,133-word mini-masterpiece, ‘Reunion’. Certainly, that’s the charge sometimes levelled by intelligent students. The father of the neglected boy is brilliantly vivid, the objectors agree — but isn’t he also horribly two-dimensional?

Thinking of the dimensions often absent in flash, I remember the Marianne Moore line that starts her poem ‘Poetry’ – ‘I too dislike it.’

I too dislike flash fiction, sometimes. 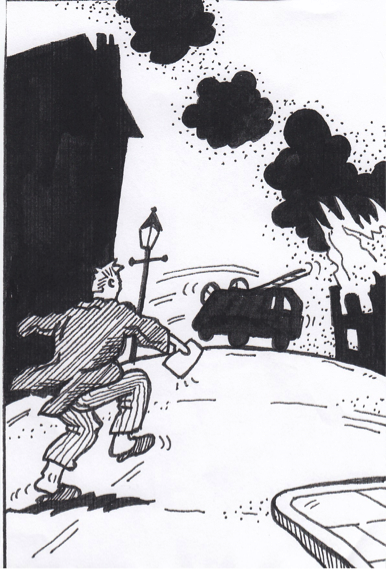 Whenever it leads me from depth, towards the surface flicker, I wonder about cartoonish tendencies. Occasionally, I gag on its slavish devotion to the present tense. Then, it feels too flat or thin – with no tangles or tangents. I may even agree with students who complain they’re too tired for flash fiction’s gaps – they want the writerto do the work.

ZAP! Out of the blue, my friend Oliver Harris shows me ‘The Huntress’ by Sofia Samatar – a new myth for immigrants in Trump’s America, complete in 374 beautiful, yearning, cryptic words. The frame works in the story’s favour. Every omitted part is implied. All parts stand for the whole.

Moore, again: ‘There is in it, after all, a place for the genuine’.

Inspired and daunted, I might try to fit my dad’s old factory inside a flash. I won’t have room for painterly layers. There’ll be little back-story, hardly any inter-action. Instead, the protagonist will be known simply by his name: The Cartoonist. 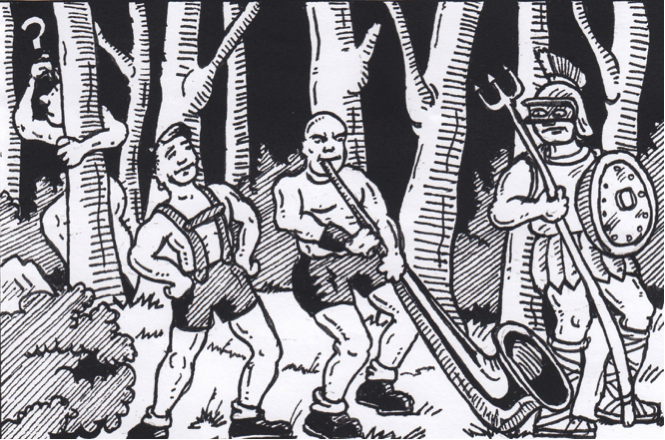 It’s shorthand, true. But the concentration will be its own reward.

Perhaps if I’m lucky, the whole thing will fit like a picture into a single frame.

After that, I’ll have to hope for something beyond me – for some movement of light to make the frame glow.

David Swann once reported on Accrington Stanley’s soccer matches for the local rag. Since then, he has worked in jails, warehouses, magazines, and nightclubs, in England and Holland. He is now a Senior Lecturer in English & Creative Writing at the University of Chichester, England. His collection, The Privilege of Rain (Waterloo Press, 2010), based on experiences during a prison residency, was shortlisted for the Ted Hughes Award. His stories and poems have won many awards, including eight at the Bridport Prize and two in the National Poetry Competition. He is currently look for accommodation off-planet.

Bob Nancollis was trained at Manchester College of Art (now part of Manchester University, UK). He has exhibited extensively in Britain, also in Eire, Brazil, the Czech Republic, and Germany. He works in acrylic paint, wood construction, collage ink and watercolour. His work shows a fascination with British images, and the early influences of Pop Art. For a decade, Bob curated The Smallest Sculpture Park in the World, as part of Chorlton Arts Festival, UK. He illustrated the cover for Dave Swann’s latest poetry collection, Gratitude on the Coast of Death (Waterloo Press, 2017).

We are Bending Genres! All your base are belong to us!