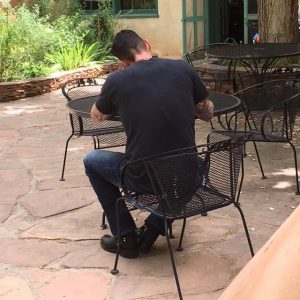 -With the exception of attending a weeklong writing workshop in Amherst, Massachusetts, in 2014, after being nominated for a scholarship by my grad school advisor and being chosen from the nominees, I’d never been to a weeklong anything related to writing, much less a retreat located across the country in the desert. It was something I’d wanted to do for ages.

The previous summer, I’d become acquainted with the Bending Genres Editor-in-Chief, Robert Vaughan, and Poetry Editor, Samuel J. Fox, when they’d published a couple of my pieces at the journal they were previously editing. Right away, they both showed a dedication to their contributors and a sense of sincerity about their love of the work that is often lacking in the writer/editor relationship.

Later that fall, Robert extended an invitation for me to join him and others in Taos, N.M. Normally, such trips aren’t feasible for me, due to finances, the fact that I’m the father of two young children, etc. However, the trip, which became a road trip, wasn’t for another six months or so, and I was able to pull together enough scratch to make it happen, thanks to the generosity of a handful of people and their contributions.

I’d hemmed and hawed about whether I could/should go, but Robert did an excellent job convincing me it would be the experience of a lifetime, and that I wouldn’t regret it. He hoped I could make it. Luckily, I did, and he was right. It was unlike anything I’d ever experienced—and I’ve been around.

2) What are your favorite things about the Mabel Dodge Luhan House site?

-The energy, the architecture, the staff, the food, the way the storms roll in and out over the mountains, the way the horizon lightens at dawn and the setting sun smears the sky purple and orange above the fields of sage, the sense of history, the ghosts, and the way that, if you’re lucky, a magpie might just land on your notebook and try to steal it away. 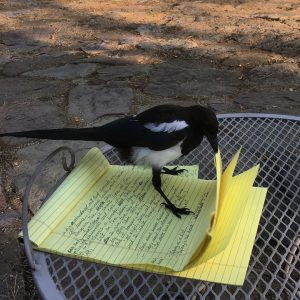 3) How did the teaching materials help or assist you with your writing?

The variety of readings and daily prompts we received during each morning’s craft talk was outstanding. They covered so many genres and forms that it was nearly impossible not to be inspired to write, to flex different muscles, to push against and tear down walls. By the time the week was over, I’d written drafts of quite a few pieces, and my head was reeling with new ideas and the possibilities that come with exploring new terrains.

4) Were there any surprises or new awareness you had about your own writing process either during the retreat or after?

-I wouldn’t say there were any surprises or new insights about my process per say, because my process has always been a sort of anti-process, in the sense that I don’t sequester myself in an office in some special chair with talismans hanging from the lamp or anything like that. I have certain rituals, like most writers, I suppose—favorite pens and notebooks, that sort of thing—but the process of the writing is a crapshoot most of the time.

I don’t have a regular routine, either, because I don’t typically do predawn mornings or late nights, which are the only times there’s any quiet in my house, and the rest of my daytime hours are so chaotic that I simply have to write when I can, which often means in my car or in the bathroom or wherever else I can find a few minutes of free time. Of course, I am a bit more rigid when it comes time to transcribe my scraps and fragments, or my partial stories and poems. But by then, I have the material and it’s only a matter of putting it down and tightening the screws, which is easier when I have the longhand stuff in front of me already. It’s pretty much always been that way for me, and it really hasn’t changed.

What I did gain, however, was a drive to try new things and not be content to let certain work be shoved into particular boxes or be branded with limiting genre labels. I also received reinforcement that you don’t have to be so controlling over the work on the first draft, which, despite having been told this many times in different ways over the years, was quite liberating. These are two of the biggest joys of writing hybrid forms: their inherent resistance to classification and that their resistance makes it easier to loosen the reins and just roll with whatever moves you.

5) Can you share what it is like to be among fellow writers for an entire week, and the community aspect?

-As I mentioned, I’d only ever been to a weeklong writing event once, and while it was fantastic and I developed some friendships there that have lasted ever since (albeit mostly on social media), it was in a much more academic setting. In comparison, the Mabel Dodge Luhan House was much more laid back and intimate. At the Juniper Institute in Amherst, there were hundreds of people in attendance, with resident writers and guest readers and so on. At the Bending Genres retreat there were about a dozen of us, which slowed the pace and made bonding with the other writers more manageable. At larger events, there’s this sense that you can never meet everyone or talk to everyone, because it’s impossible, but in Taos, I was able to get to know each of my fellow writers in a way I wouldn’t have been able to elsewhere.

And let’s not forget the small group workshops, which are much more conducive to giving and gaining feedback on one another’s work. Plus, I got to hear/read some simply remarkable work by some writers whose talent kept me on my toes the entire time I was there and long after.

6) Since the workshop, you have had some success with the work you might have started in Taos, or revised while there. We know your first collection came out recently. Congratulations! Can you share the links to any of these pieces?

-Yes, I’m still thrilled to have published several pieces that I either wrote or worked on while I was in Taos. The first was a piece titled “Drink,” which was published in Ghost Parachute. The second two, “Dream Poem: Taos, NM” and “The New Kid,” were both published in Eunoia Review with a few other pieces that I wrote after the retreat. The last of the pieces written at Mabel Dodge to be published was one tilted “Nova,” which appeared in Midway Journal. The only piece that I’d started before reaching New Mexico but nearly finished while I was there was a hybrid essay on Grit Lit published in Cowboy Jamboree shortly after my return to Ohio.

As for links to pieces in my new collection, In Just the Right Light, early versions of many of the stories are available to read in online publications such as New World Writing, Elm Leaves Journal, The Vignette Review, and Literally Stories. Of course you can also spare yourself all that pesky clicking and scrolling by just picking up a copy of the entire book at my website www.williamrsoldan.com😉

Thanks again for asking me to do this interview! See you at Synergia Ranch in three weeks!

Robert Vaughan is the Editor-in-Chief of Bending Genres. He is the author of five books.