The first batter was Perez. He’d been leading off all year, and he was good at it. There in the box he twirled his bat in a loop and looked at the pitcher, Strait, who moved fast through his windup. Fastball is what Perez knew in the bottom of his soul, and so it was. He watched the baseball go by, knee high.

“Alright baby,” said Fredrickson—Freddie—behind the plate. He tossed the ball back to Strait.

Perez leaned in. Outside again, he thought. Same place.

Oh and two, thought Perez, his mind otherwise empty. This time he had to wait longer for the pitch but when it came, it came fast.

Inside, he thought, and he leaned slightly away from the plate.

“Hiya,” said the ump, gesticulating with his arm.

One and two, he thought, looking over to the coach at first base. Then he zeroed in on Strait’s right shoulder, saw his feet move. That shoulder drew back slowly, the glove dropped, his hand appeared briefly then disappeared behind his head. Suddenly it lashed out at him, violent, like a snake, and Perez drew back his own shoulder. He saw the ball like another sun and he stepped.

Perez topped the ball with the end of his bat and it careened out of the baseline behind third. He regained his balance and took a short walk. He adjusted his new gloves as he thought about how the ball seemed to rise when it actually sank. Sunk, he thought. Gringos. He patted his helmet.

And sinker it was, and Perez got down on it, snatched that red spot and lifted it, exhaling, and twisted through it, many muscles, wrapped tendons, wholly uncoiled, and for a moment he was not moving at all. Perez paused with the kinetic energy of his bat all spent, and he watched the ball again, filled with an adrenal kind of hope, but he knew he had not gotten all of it and he saw Jones move backward to the wall, stop there with his back against it, reach up with his glove, and pluck it from the sky.

Perez, halfway to first base, turned and headed to the dugout just as Dirk Swagger stepped up to the plate, always over eager. Strait caught the ball from Turner and turned and was ready, Swagger saw, feet on the rubber. He’s so tall.

Swagger saw the big man rear back and dance and suddenly he was coming straight at him, closing the distance between them, and now he saw the pitch come down the pipe and thought it was a misfired curve, definitely coming too slow but with no movement, a Saturday afternoon pitch, and he thought he could have his way with the ball, and then suddenly he knew he was swinging too late. How could this be, he thought and he tried to muscle through it, speed up his slender arms. He connected but it cracked his bat. Induced, Swagger thought as he dropped the bat and raced down the line.

Swagger was a hometown hero, and hometown heroes ran hard. They put their heads down and ran hard even when the ball bounced easy to third. Even when they knew Greggs Milton was a gold glover and, just as it happened, that he’d fire that ball on a taut clothesline to first, there’d be a thwack when the ball bruised into Jesperson’s glove, all with two, maybe three steps to run, and when Swagger got there he just nodded, accepted the facts as they were.

Jesperson said “all right,” but Dirk Swagger couldn’t tell if he was saying it to him or to the short stop, Donner, to whom he threw the baseball. He didn’t say anything. He stepped into the dugout expecting a lecture from the pitching coach.

His father cut him off. From his hard mouth he hawked shells, his eyes fixed on Carter in the batter’s box. “Gotta take more pitches from him, Dirk.”

“It seemed so slow.”

Carter’s wife had been in labor now for several hours. That’s what he was thinking about, of course, when he stepped to the plate. She went into the hospital early that morning after a long night of early labor. She tried not to but Tricia kept him up with her pacing and her excitement. At first she was chatty—remember we have to call my mom to get the dog—and then she got kind of moony, and Carter turned in the bed in a huffy way that she didn’t appreciate, and he understood why, the changes that were happening.

“Hiya,” said the ump, startling him.

Right, time to work. Carter, tired, twisted his cleat in the loose dirt, looked at Strait there on the mound, so tall. Strait wound up and fired and Carter knew the ball was up in the zone. He unclenched and the ball thwacked into Fredrickson’s glove behind him.

After several sleepless hours and what seemed like thousands of mildly painful contractions, Tricia got serious. The contractions started to hurt. “4-1-1?” Carter asked her, and she nodded, and they loaded up his F150. So many bags, he thought. I hope it comes quick, the baby, she.

In the booth, he knew, someone was telling the world about this baby, her. People all over the world were wondering what it would be like to have to play baseball while across town your wife brought forth new life. In his mind he heard the scream of her labor.

He asked for a second. Time.

“Ho!” said the ump. Carter stepped out of the box, watched Strait loosen up.

“Yeah,” said the ump, looking at Carter, who tightened his batting gloves. One, two.

“Okay,” he said aloud, stepping in. 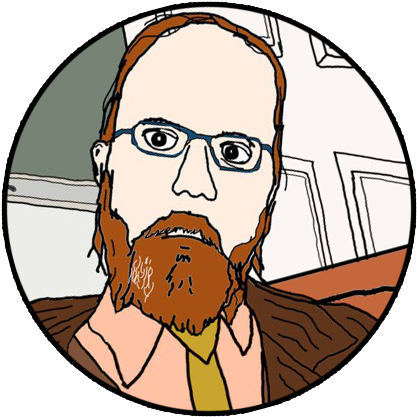 Adam Robinson lives in Atlanta where he runs Publishing Genius, a small press, and works as a publishing consultant.