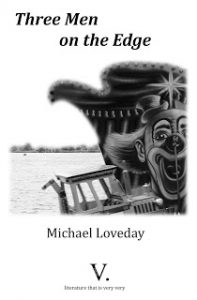 Three Men on the Edge by Michael Loveday? Not boring.

This book—the first full-length flash collection from UK-based V. Press—takes us to the edge of traditional prose and veers into poetry. Following the lives of three men ensconced in the urban hinterlands of London (Rickmansworth, Hertfordshire), Loveday crafts a novella of snapshots, a literary album of ennui and suburban flatness.

Structured in three parts (the three men), each section is populated with short flashes and vignettes (from a few lines to a few pages in length). Some of the best of these pieces defy narrative in favor of cadence and metaphor, and this builds over the book, snippet by snippet, with beautiful and beguiling lines like:

‘His wife’s voice accompanying him, he circles the lake as breezes drag shadows over the surface.’ (“Bury Lake, February”)

Place is integral to this book, and we are invited to wallow in the garish and the kitsch:

‘They emerge into a clearing: a shock of burgundy, olive and gold signage, its annual ceremony of machines invading the mown grass…[h]ere are the rock ‘n’ roll dodgems, Sensational Octopuses, Jubilee steam gallopers…‘ (“Ceremony of Machines”)

And we are invited into the very dull:

‘Outside the theatre afterwards Martyn loiters, wondering where on earth he’s drifting to. Maybe The One he’s destined for doesn’t live in South West Hertfordshire after all (“i”)’

The beauty of this book, overall, is its not-neatness, its focus on the out-of-focus, its one minute a story, its next minute a footnote, its edginess, its familiarity, its murkiness, it’s really good.

Michael Loveday lives in Bath, UK. His flash fiction novella Three Men on the Edge is published by V. Press, and his stories have appeared in publications such as Flash: The International Short-Short Story Magazine; National Flash Fiction Day Anthology 2017 and Funny Bone: Flashing For Comic Relief.  He is Judge of the 2019 Bath Novella-in-Flash Award. He runs a blog about flash fiction, prose poetry and poetry: https://pagechatter.org . Also, further details about his fiction and poetry: https://michaelloveday.com.

Jonathan Cardew’s work has appeared in Passages North, SmokeLong Quarterly, Wigleaf, Cleaver Magazine, Cream City Review, and many other publications. He was a finalist in the Best Small Fictions 2016, The Wigleaf Top 50 2017, the Neutrino Prize 2018 (Passages North), and The SmokeLong Quarterly Award for Flash Fiction 2018. He edits fiction for Connotation Press and runs the MicroViews column at Bending Genres. Originally from the UK, he lives in Milwaukee, Wisconsin.